Download TAMA App. An Android application for reporting waste issue in your locality, find recycling centers and services in your neighborhood, resources and news on waste management and clean-up days. 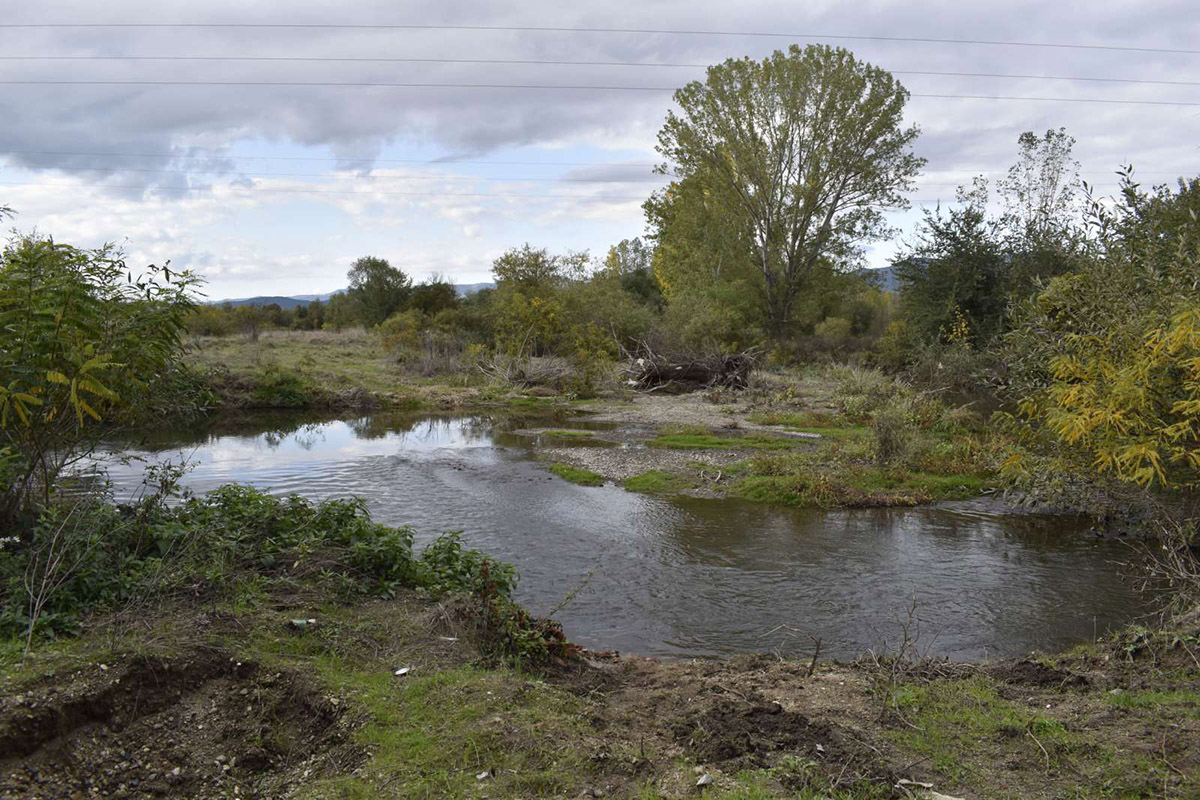 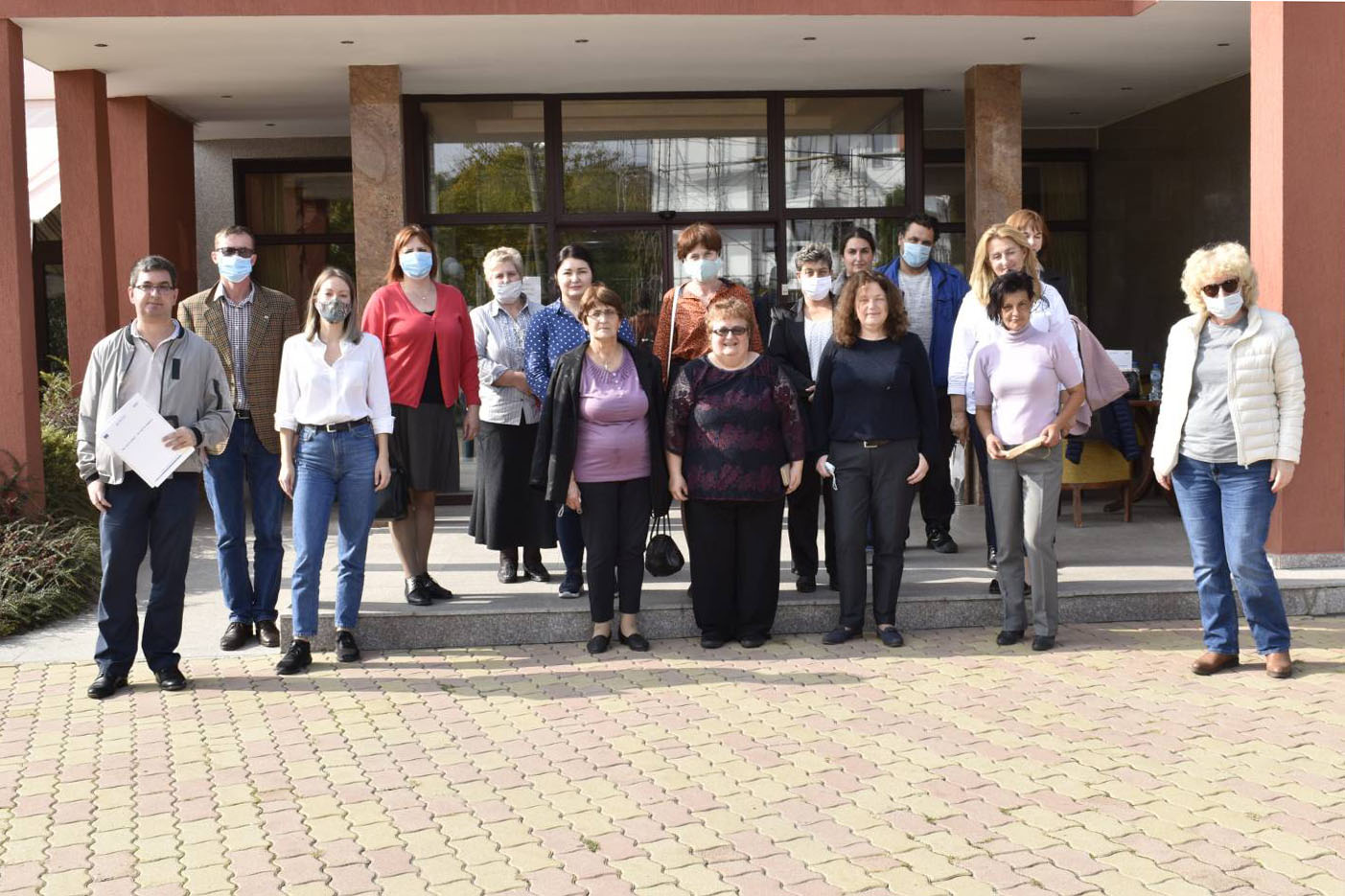 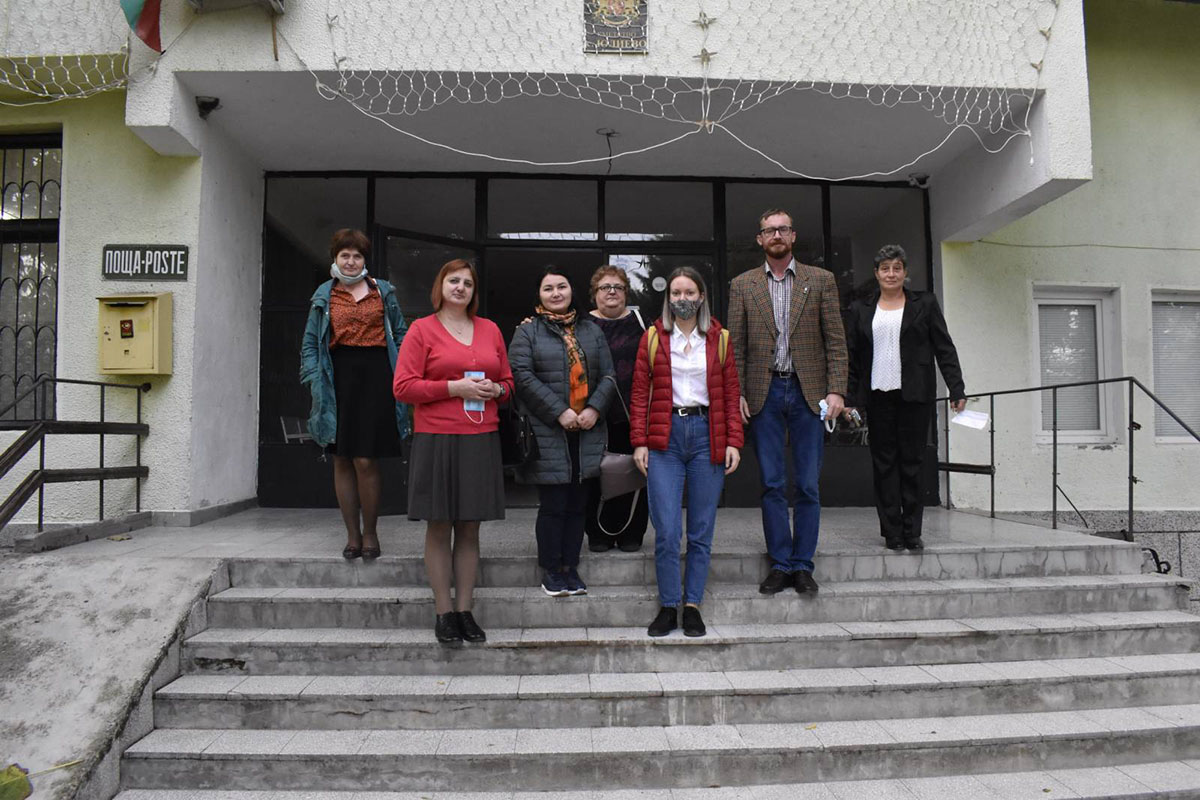 MICROPLASTICS AND THEIR POSSIBLE OBJECTS OF FUTURE PROJECT WORK

Dumping of plastic waste and illegal discharge of untreated wastewater and animal waste into the river beds are pressing issues for the countries from the Black Sea basin.

The new project Cleaner Rivers - Cleaner Seas Project (CRoCuS) aims at synergistic action of 4 NGOs and 1 townhall from different countries at the Black Sea basin: Bulgaria, Moldova, Romania and Ukraine, who came together to produce innovative tools for rapid assessment of river litter and waste recycling potential, promote sustainable waste management practices, share good practices and mistakes and spread the word across the borders for reduction of bio-degradable waste and plastics recycling and minimization. River and marine litter are one from the biggest threats to ecosystems, but also to human health and economic welfare.

A wide awareness campaign, capacity building of local actors and mobilization of communities on river litter reduction and prevention will be conducted. The partners will bring their experience and new coordinated actions and knowledge: a trash alert mobile application, teacher trainings and experience sharing workshops, demonstration activities on how to produce compost and mulch, clean-up activities on the rivers Prut, Dniepr and Tundja, ways of reducing/recycling of plastics, press conferences/social media, TV/radio promotions, implementation of demonstration facilities on sustainable waste management in 7 communities located on the banks of Prut, Dniepr and Tundzha rivers, development of training packs and promotional/educational materials.

Earth Forever Foundation is the leading partner of the international project with a budget of 952 000 БГН, provided by the EU Black Sea Cooperation Programme 2014-2020, and responsible for the implementation activities in Maglizh municipality – the villages of Yagoda and Yulievo, where Earth Forever works in close collaboration with mayoralties, community centers and schools.

The CRoCuS Photo exhibition launched its journey today along the Tundzha River Valley in Bulgaria starting - from the Community center in Yagoda, Maglizh Municipality to finish in August 2022 in the Museum of Photography, Kazanlak.

The exhibition was launched today as a joint initiative of Earth Forever Foundation, the Municipality of Maglizh, the Mayoralties of Yulievo and Yagoda and the Community Center in Yagoda.
Welcome words were shared by the Executive Director of Earth Forever, Environmental officer of Maglizh Municipality, Secretary of the Community Center - Yagoda. A special guest of the event was Mr. Eniz Karadzha - a Photographer who donated some of his pictures to be included in the exhibition.

The exhibition will travel a long journey through community libraries, schools, community centers along the Tundzha River until August 2022 when it will have its final presentation in the Museum of Photography in Kazanlak.

This photo exhibition is a component of the Cleaner Rivers - Cleaner Seas project, funded by the Black Sea Basin Programme 2014-2020 - part of European Union’s Cross-Border Cooperation (CBC) under its European Neighbourhood Instrument (ENI), and is being implemented in Bulgaria, Moldova, Romania and Ukraine.

Activity A.T1.8: Awareness raising on the protection of rivers from litter and preparation for a clean-up day 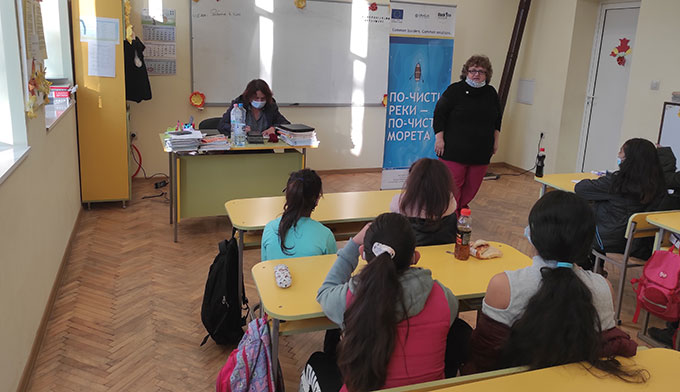 52 pupils and 5 teachers from Maglizh Municipality, Bulgaria, participated in an awareness-raising event focused on the importance to protect rivers from litter. The training pack and factsheet on composting were demonstrated to pupils and teachers.

On May 25, 2021, in the framework of the project "Cleaner rivers - cleaner seas" CRoCuS BSB-784 the clean-up activity of the Dnieper banks was organized on the territory of the village of Vesele. It was provided with the support of the European Union. The teachers and students of Nova Kakhovka Polytechnic College of Odessa National Polytechnic University, the headmaster, teachers and students of Vesele Lyceum, the utility company "Silkomungosp "VESELE" of Nova Kakhovka Town Council, entrepreneurs, representatives of the NGO "White Arrow" and members of " MAMA-86-Nova Kakhovka", in general 91 people , took part in the event. 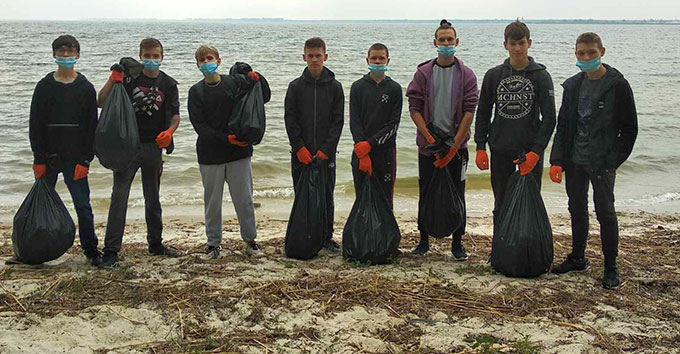 On May 27, 2021, in the framework of the project "Cleaner rivers - cleaner seas" CRoCuS BSB-784 the clean-up activity of the Dnieper banks was organized on the territory of the town of Tavriisk. It was provided with the support of the European Union. . The teachers and students of Tavriisk Lyceum 1, Tavriisk Lyceum 2, the utility company “Komunservice”, Kakhovka Forestry, LLC ADM "Tavria Elevator" and members of " MAMA-86-Nova Kakhovka", in general 80 people, took part in the event. The work was carried out on 2 sections: the western and eastern sections of the bankof the Kakhovka Reservoir of the Dnieper River up to Nova Kakhovka River Port.

On 18.09.2020 NOVOKAKHOVSKA MISKA HROMADSKA EKOLOHICHNA ORHANIZATSIIA "MAMA-86-NOVA KAKHOVKA" held an event dedicated to the launch of the project "Cleaner rivers - cleaner seas" (CRoCuS). The project , involving Bulgaria Moldova. Romania,is organized and funded by the European Union and will last 30 months. MAMA-86-Nova Kakhovka represents Ukraine in it. 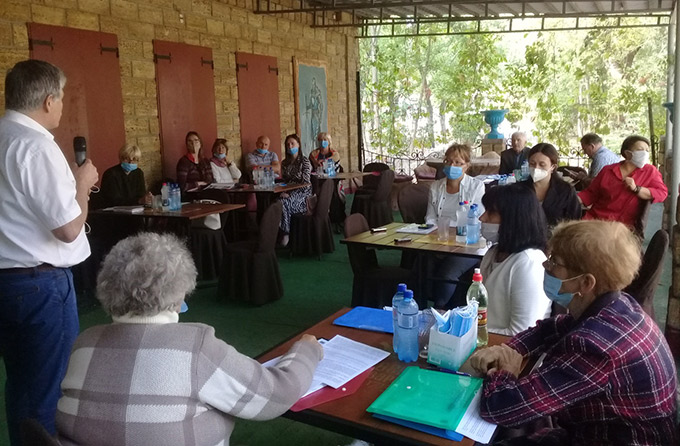 Deputy Mayor of Nova Kakhovka Syrovatko V.M. congratulated the participants, saying that the project is quite interesting and the city authorities are ready to help in its implementation. Chairman of the organization Mama-86-Nova Kakhovka (Project Coordinator) Kozak T.F. and Communication Officer Parafenko OV acquainted the audience with the Project objectives and scope - to produce innovative tools for rapid assessment of river litter and waste recycling potential, promote sustainable waste management practices, share good practices and mistakes and spread the word across the borders for reduction of bio-degradable waste and plastics recycling and minimization. The Сommunication Officer Parafenko O.V. provided information about the Project Partners Taisa Fedorivna emphasized the relevance of this project for our region, told about the research of littering of the Dnieper banks already done, and shared further work plans. During the event, the amount of the project and its own contribution of more than 210,000 Hryvnias was indicated. In this regard, the Project Coordinator said that this amount is quite large and needs to enlist the support of the community and business to collect it.

The event was attended by representatives of Nova Kakhovka and Tavriysk Town Executive Committees, the Kosatske and Vesele districts, the Town Education Department, private entrepreneurs, volunteers, public activists, an representatives of the press.

On April 21, 2021, on the occasion of Earth Day, the Ecotox association organized an awareness and training activity with students and teachers of the "?tefan cel Mare" gymnasium from Valeni village, Cahul district. The action, which took place outdoors, along with a cleanup activity organized togehter with WiSDOM association was attended by 52 students and 3 teachers. Participants were trained by AO Ecotox members how to collect plastic for recycling, how to minimize volume in order to protect rivers from the impact of pollution, which has a very negative effect on biodiversity and human health. Teachers Craciun Anastasia, ?aralunga Valeria and Burca Mariana listened with great interest and acknowledged that such information is very important for the formation of conscientious attitudes towards the environment and it is a pity that so many deposits of waste were discovered near the Prut River, because they reach the river and are taken to the Black Sea, posing a danger to biodiversity. It was agreed that some online lessons would be needed to allow more students and teachers to participate.

On August 6, 2020, the WiSDOM Association, in partnership with AO Ecotox, organized a launching conference on the project "Cleaner rivers - cleaner seas" (CRoCuS), which is implemented within the joint operational program "Black Sea Basin 2014- 2020 ”, of the European Union. The conference took place inside the TohaTeen Hub, a youth center initiated and developed by the AO Pro Bono Information and Resource Center.

The presentation of the project began with a greeting from Mrs. Nadejda Andreev, President of the WiSDOM Association. Speaking about the context of the project, Ms. Andreev said that there is an increasing pollution not only of the soils but also of the waters, especially rivers, so one of the objectives of the project is to mobilize local volunteers to assess the most polluted places, but also to minimize the volume of the riparian waste. Another objective is to promote the practices of sustainable management of plastics and biodegradable waste, as well as to assess the potential for waste recycling in the Prut, Dnieper and Tundja river basins.

On August 7, 2020, the Ecotox Association held a launch conference focusing on the scientific community, attended by representatives of various research laboratories of the Institute of Zoology, members of the association WiSDOM and Ecotox. Ms. Zubcov, the coordinator of this project from AO Ecotox, reviewed the CRoCuS project and the expected results, including small-scale demonstration facilities, networking workshops and experience exchange. Ms. Zubcov expressed the hope that the waste will be transformed from a problem into a resource, depending on how it will be managed.

Liubovi Lebedenco, representative of the CRoCuS team from AO WiSDOM, gave a detailed presentation on the composting facilities, the wood shredder and the pyrolyser that will be important in the demonstration activities for the local public about waste reuse solutions.

The Deputy Director for Scientific Activity of the Institute of Zoology, Ms. Livia Calestru remarked that “listening to today's presentations I reviewed the problems facing my village. I think that the waste problem is a common one for all the localities in the Republic of Moldova ”.