Four youth volunteers of Earth Forever – Angel Gyaurov, Maria Geleva, Mira Hristova and Raya Ivanova, got aninvitation from the Council of Europe to take part in the first Youth European Parliament for Water in the French town of Espalion. Bulgarian delegation was lead by the Executive Director of Earth Forever – Mrs. Diana Iskreva.

In Espalion, our participants, together with youth from other 15 countries of Europe, Mediterranean and central Asia exchanged information and experience and debated on the problems of water management. The result of their joint hard work was summarized in the Declaration of Espalion.

Ms. Maria Geleva from Earth Forever was elected by the young participants to be a President during the First Parliament for Water that took place on 17.07.1999 in Espalion. The young people adopted the Declaration of Espalion.

The Declaration of Espalion consists of four major statements. The first one – Water and Nature, explains the importance of water for the man and the nature. The second one discusses the problems of water pollution, waste saving and measures to be taken to stop its pollution and wasting. The third section reminds that we have to show solidarity because there are people in this world who live in water constant water constrain. The last section describes the actions all youth delegations will undertake in their own countries as soon as the Parliament of Espalion was over.

Earth Forever translated and published the declaration in Bulgarian and Russian.

The Declaration of Espalion was presented in the Water House of Citizens at the second World Water Forum, The Hague, from Ms. Maria Geleva, Mr. Gilbert Cayron - Mayor of Espalion, and Mr. Jean Berturan from the Council of Europe on 18.03.2000.

The Declaration of Espalion was deposited by Ms. Maria Geleva and Mr. Alex Weizer (Co-Presidents of the first Youth Parliament for Water) at the Parliamentary Assembly of the Council of Europe on 28.06.2000 in Strasbourg. 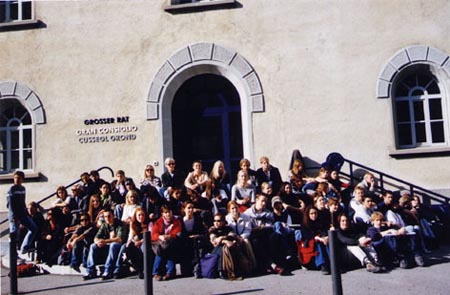 In July 2001 youth volunteers of Earth Forever (from Stara Zagora and Haskovo) presented Bulgaria for the second Youth European Parliament for Water in Barc, Hungary. The Parliament dealt with the issues linked to tourism development and protection water quality.

The young people from 20 countries launched the Big Jump initiative with bathing in the Sava River. They pledged that each July 14 at 14:00 they will organize Big Jump event into the river of their town or city. In this way people will start taking more interest and care for the quality of bathing water and the water quality as whole in their place of living.

The team of Earth Forever was awarded and supported to implement a local initiative as a result of which there was organized a city clean-up campaign for the Bedechka River.

The World Youth Parliament for Water, an initiative of the International Secretariat for Water and its network members, was convened in Quebec City on November 18-22, 2002. The event was part of the preparatory activities for the International Freshwater Year 2003 and brought together 80 young participants from 23 countries, between the ages of 14 and 18. It provided an opportunity for the youth to reflect on water management issues in their home countries and around the world. Bulgarian delegation was represented by 4 youth-volunteers of Earth Forever from Stara Zagora and Kazanlak.

The World Youth Parliament for Water is part of the preparatory process leading up to the World Assembly of Wisdom for Water to be held at the Citizens House of Water and its Agora during the Third World Water Forum in Kyoto in March 2003. This initiative, supported by the Quebec ministry of Environment, fosters the participation of future generations in activities related to the conservation, protection and prudent use of one of our most precious common assets on earth: WATER. Moreover it is in keeping with an educational process on solidarity and sustainable development.

The Parliament’s main objective was the adoption of a Water Act within the framework of a structured democratic debate (presentations, discussions, votes, etc). The four work themes were:

The 5th Youth Parliament for Water «Source to Delta » brought together, from 5th to 12th October, in Switzerland, 70 youth and adult participants hailing from the Rhone, Rhine, Danube and Po basins. Bulgaria was represented by four young girls, participants from the Fourth Youth Parliament for Water in Stara Zagora earlier in 2003. Together with young people from Switzerland, Italy, France, Germany, Netherlands, Austria, Bosnia and Herzegovina, Serbia and Romania, our participants worked hard to help European river basin development.

The opening ceremony took place in Bern; the 6th of October 2003.

During this opening ceremony pronounced an official sentence to swear them in as parliamentarian.

For two and a half days, the youth were grouped according to hydrographical basins in different Swiss cantons, and basing on the real situation in their localities, they presented problems and solutions regarding their rivers and/or streams. As a result of those water basin commissions, the youth parliamentarians elected their water basin President, and they draws an actions plan according to the priorities of their water basin.

The sixth Youth Parliament for Water took place in May 2005 in the Danube Delta, Romania. The delegation of Earth Forever consisted of young people from Stara Zagora – winners in competitions for better water management and awareness. The delegation was lead by Mr. Angel Gyaurov (Program Manager of Earth Forever and participant in a number of youth parliaments for water).
The young people made excellent presentations and Ms. Svetlozara Dimitrova was elected a Spokesperson of the Parliament.

The nest step was the participation of youth-volunteers awarded in the competitions in adiscussion forum about Danube in June in Turnu Magurele, Romania.